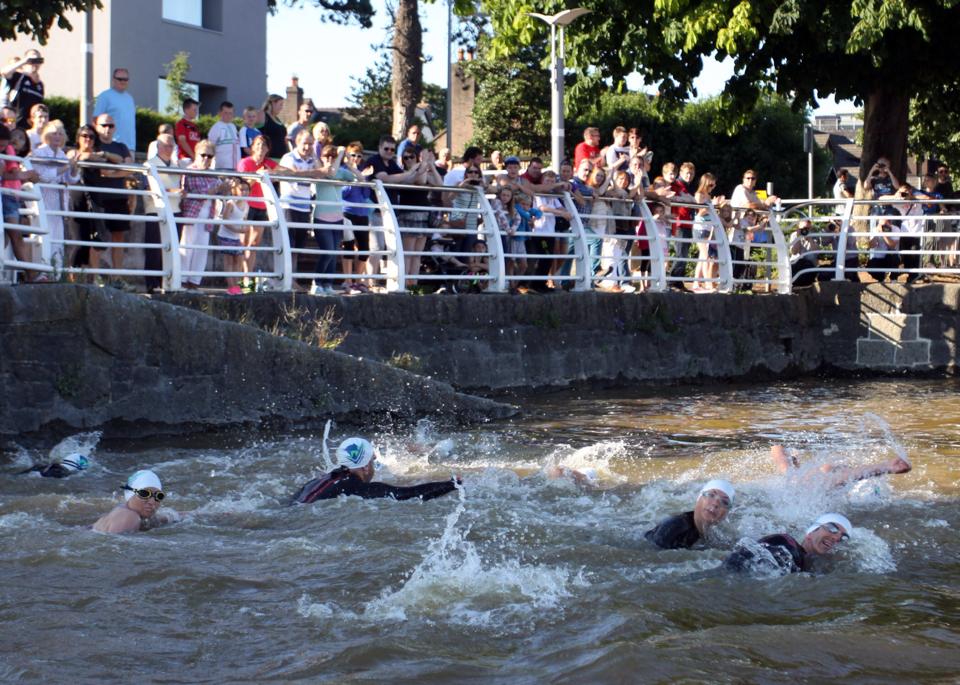 On a beautiful day in the centre of Limerick City the Thomond Swim took place. The annual swim is attracting an increasing number of participants and this year, even with other open water events in Cork, Fermoy and Galway over 80 swimmers took to the water. As with recent Thomond swims the main prizes went to clubs from outside the city with Dublin clubs taking the laurels this year.
The boardwalk along the full extent of the 1800m course afforded the spectators an excellent viewing platform. Growing local interest in the event was reflected in the largest turnout of spectators since the swim was re-introduced some seven years ago. It is estimated that up to 1000 people watched the event.

The prizes were presented in the recently renovated Shannon Boat Club clubhouse by the Mayor of Limerick, Michael Sheehan, who also started the race. Veteran Brian O’Dwyer cruised to victory in the men’s event with last year’s winner Adam Lynch of Phoenix, taking a very creditable second place. The only solace on the day for the organizing club, Limerick Masters, was that Philip Brady came in third place.

The increasing status of the event was recognised by the inclusion of SI high performance and development squad members based in The Arena in UL and the attendance of Lars Hummer the HP coach at the race. Not surprisingly the fastest male and female swimmers went to development squad members. The male award went to Chris Bryan, who competes in the European Open Water Championships in Berlin on 14th August. One of the youngest swimmers, Shona Hickey, who was competing in an open water event for the first time, won the women’s fastest swimmer award.

Showing the increasing interest in participation in open water swimming there was also an increased number of wetsuit entrants. Daragh Fahy of Shannon Masters was first home in the men’s wetsuit category while Tori Hehir of Sandycove Island took the women’s award.

After the race the participants and spectators alike enjoyed the hospitality and food provided by Limerick Masters in Shannon Boat Club. Suffice to say that the social element of the event stretched into the early hours. A good day was had by all who participated and attended and it is expected that next year’s event will be bigger and better. Unfortunately for winner Brian O’Dwyer, had to leave early as his charity swim was being held in Dublin the day after The Thomond Swim, he missed a great night. Next year when he returns to defend his crown he may last the real course!!!

Who knows there may even be a local winner next year.

Thanks to all those who participated in the event and we look forward to seeing you next year.

Full results can be seen at

Please check out our Facebook page for a full set of pictures from the day.